I’ve learned this the hard way.

The story of our life. I can’t see a way out of this!

It’s hardly noticeable from here, but the book in the last panel has two letters on its cover : HP.

I’m sure you can figure out what it is 🙂

Frannie has been raised to be a good catholic girl, yet events of her past make her want not to believe in the existence of God.

When two new guys join her school, Frannie is surprised to have them immediately drawn to her – and to be drawn to them both, too. On one side there is sexy, dark, dangerous Luke; on the other, sexy, beautiful, charming Gabe.

And both have plans for her, plans that will force Frannie to face her path and question her beliefs once more.

Okay, so this book was clearly not for me. And I always feel bad giving a somewhat bad review when my disappointment so obviously comes from the fact that the book and I, we are clearly mismatched. I don’t think we could even be friends. Neighbors, maybe. Casual acquaintances. But nothing more.

I have no doubts there are plenty of readers out there who will love this book : it’s hot, sexy, steamy, with a lot of “ooohs” and “aaaahs”, and a love triangle that could rival the best out there. It’s romance in its hottest incarnation.

The plot, in itself, is interesting. Having Heaven and Hell battling for the soul of one girl, for a reason that is still unknown in the beginning, was an idea that had a lot of potential. I imagined an epic story between the forces of good and evil, with Frannie at its center, probably fighting for her own free will. I would have loved that.

But, because I am not a romance reader, this is basically what happened :

As I often mentioned in the past, I am not a romance reader. I love when romantic interactions are a part of the novel : romance, love, relationships, they are all part of life. But when the romance is at the core of the book, it doesn’t work for me. So even though I had a lot of fun at the start of the book, I was quickly annoyed by Frannie’s yo-yo dance between the two guys, and the obviously steamy scenes that followed.

If I think of my personal rating of the book, it would probably be lower; but I had to recognize, the book also had some strong points, hence the “in-the-middle” rating :

So while I managed to finish this one, I have no idea whether I’ll read book 2 or not. It’s really not at the top of my list. But if you love paranormal romances, hot mysterious guys with a dark side, twists on angels and demons and sexy steamy scenes, you’ll probably find Personal Demons to be a great fit for you 🙂

There are things in this world, that are just too awful for my mind to process correctly. 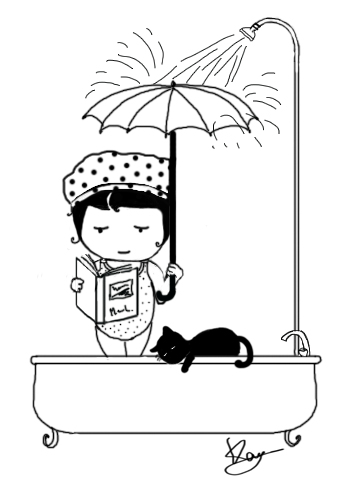 Do you read in some unusual places? Or, do you read when you’re not supposed to?

Hi! I'm Kay, and I'm a French Canadian reader, an art historian in the making, a photographer and a knitter.

For any question, comment or review request, click on the "Contact & Info" link at the top of the page. I'll be happy to hear from you! :)